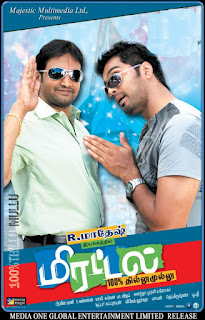 'Mirattal' is the comeback vehicle of actor Vinay Rai after 3 years of absence in Tamizh cinema. This film is a remake of a hit Telugu film titled 'Dhee'. As it is the flavor of the season to have Santhanam, in its cast, this film too has him playing the sidekick to the hero.

Vinay Rai looks at ease, pulling off the character of Babloo and plays comedy quite well too. But he has to improve his dancing skills a lot, if he wants to make it out as commercial artiste. Sharmila Mandre, a Kannada actress makes her debut in this film. Her expressions and emotions are pathetic and seriously needs to go for acting lessons, if she intends to make a living as a performing artiste. Prabhu breezes through his role and Pradeep Rawat as the antagonist was loud and his character looks silly. Santhanam was the best asset and only asset of the film. He is simply funny with his dialogue delivery and fantastic one-liners. The film is full of such witty one-liners, which keeps you entertained for sometime. Accompanying him in the comedy portions are 'Ganja' Karuppu, Pandiarajan and Mansoor Ali Khan. Besides them, Rishi, Uma Padhmanaban, Yuvarani and Bosskey dons small roles in the film.

The film carries very average technical standard. Vivek Harsha's editing work was just normal, as in to compile a set of scenes into a film. E.I Mayan's art work was average too, with sloppy work in the birthday sets. D.Kannan's camera work has nothing to shout about apart from few scenic locations shot in England covering areas such as Richmond, Windsor, Bath, Surrey, Oxfordshire and around the University of East London. Praveen Mani's songs were boring too. "Radio Radio" a typical 'kuthu' number was shot in England around housing complex areas and "Kalla Paarvai" was shot with castle and greenery backdrop. "Mugamoodi" was shot with a birthday celebration background, involving the other cast members.

Director Madhesh's film has a script which is as old as the hills and nothing novel about it. Also the presentation was pretty lame and only Santhanam was helping the audiences to not fall sick. The only saving grace act from the director is to include Santhanam in the film and to pen funny one-liners for him. The story has plenty of flaws in script wise and the supposedly 'thrilling' climax was just lame.


'Mirattal' is just a one-time watch and that too for the comedy portions only. 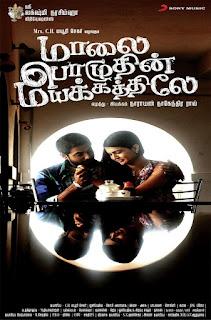 'Maalai Pozhudhin Mayakathile', a wonderfully titled movie, this film is by newcomers entirely from the crew. It garnered attention through the success of one of its song on Youtube, "Oh Baby" hitting more than 200,00 views. Also, music director Achu's songs were very well received, especially the haunting, melody numbers. Well designed and photographed, it carried an interesting premise, that is the whole movie will be set in a coffee shop and what happens between the characters in that coffee shop, who are stuck inside, due to heavy rain. Did the film charm us as how the music did?

The protagonist role was done by Aari, who previously did the Shankar produced 'Rettaisuzhi'. He has an aroma of confidence with him and his appearance makes him a delightful to watch, to some extent. Heroine, Subha Putela, Miss India South of 2010, makes her debut in Tamizh cinema. Her performance is quite average and its a little obvious that she is struggling with the language. Not much of acting scope for her, as she has very less emotions to display. The rest of the cast did justice to their respective roles, be it Panchu Subbu, Sivaji R.S, Tejasvini, V.Balaji, Karuna, Sathish and etc. Choreographer Nandha and Ashwathy Warrier makes an appearance in a song.

Technical wise, the film has some decent output from the crew. Stills and designing by Maneksha and Jeff was good and romantic, keepin in mind with the theme of the film. JPK Prem used minimal but just necessary amount of props in the film as 90% of the film is based only around the coffee shop. Editing by M.Thiyagarajan was decent, and costumes were done by Narayanan Nagendra Rao and Gopi Amarnath, who are the director and cinematographer of the film. Gopi Amarnath, has captured some good shots in the songs and the color tone used in the film, especially the ambience it created for the coffee shop scene, was splendid. Not to forget, the beautiful rain shots, too. Achu, has delivered some beautiful melodies in the movie. "Oh Baby Girl" picturized against a bulbs-lit backdrop, was shot in a music-video format, something similar to the Asian music videos. Also it had some good choerography by Nandha. "Nerathin Neram Ellam", a poem recital was shot on the lead pair sitting romantically on a bench, with close-up shots, and a soft blue tone. "Yaaro Ivalo" was shot in colorful locations with good lighting. "Yen Intha Thideer" was shot in a dark color tone, with some ballerinas dancing around the sad protagonist. The song has been shot in the washroom of the coffe shop portrayed, so the angles were a little close and tight. The pick of the lot of the songs, is the 'Yen Uyire" track sung by Karthik. It was shot like a dreamy-sequence, in fog-filled, green pasture atmosphere. And also there's another version used at the end of the film, sung by 'Bombay' Jayashree. "Kadal Karaiyinile" a retrospective-montage song was picturized on the hero, reminiscing about the girl he met. Achu has also delivered soothing background score for the film, especially with the violin section.

Narayanan Nagendra Rao, the director, would have been inspired by Gautham Vasudev Menon's style of romance film, but sadly his script has nothing to offer, story wise. The script is very weak, dialogues are preachy, and the characters has no depth in them. There is no chemistry between the lead pair and there's no organic story development. Actually, no one can figure out what is the actual story of the film or what the director wanted to convey, in the first place ! Trying to present a romantic scene should be just left for advertisements and not feature films, unless you have a solid script and screenplay!

'Maalai Pozhudhin Mayakathile', a poorly written film with no story to tell ! Its a pity that Achu's wonderful music was wasted, entirely. The only other thing that can be appreciated is the 'effort' of the team to use live sound recording instead of dubbing the voices for the artistes, which gives a realistic feel to the settings.