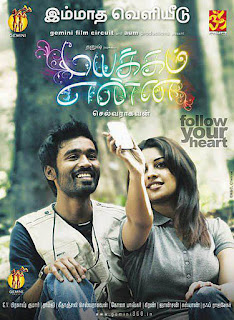 Mayakkam Enna was anticipated with great expectations thanks to the chart-busting tracks of GV Prakash and also having the stamp of Selvaraghavan-Dhanush combination which has worked wonders before. Dhanush is on a all-time high, fresh from becoming the National Award winner, but he had to score in this film as his previous 2 releases, Mappilai and Venghai were damp squibs. As for Selvaraghavan, it's a total changeover from Aayirathil Oruvan and the theme was something he handles very well and known for, darker personalities of common people and their relationships.
The film belongs to Dhanush as he delivered a smashing performance. Certainly one of the best in his whole career, Mayakkam Enna brought out more refined performances from Dhanush. He scored in all the transitional periods, be it from the amateur photographer, to a caring husband, a drunkard on the verge of losing his sanity and finally a matured man who has seen success. His facial expressions and the subtle emotions were well punctuated with controlled dialogue delivery and intonations. It's really difficult to pick out the best scene of his in the film and its amazing to see Dhanush evolving into an intense performer. He has raised his bar and more accolades are on the way to his doorstep. Debutante Richa Gangopadhyay couldn't have asked for a better entry into Tamizh cineam. She is the pivot of the script where, the story unfolds around her and is very much impressive. Selvaraghavan's films do have strong women roles and here it goes to Richa. She is neck-to-neck performance wise, with Dhanush and her best scene was certainly the outburst she did in the second half. With no dialogues, it was a brilliant moment from her and she pulled it off with intense emotions and body language. Another added plus point to her is the dubbing of Deepa Venkat as the voice of her character. Kudos to Deepa as well for a near perfect dubbing and adding strength to the character of Yamini. Sunder Ramu, a professional photographer himself, makes his debut here as a friend of Dhanush and he was very much adequate and pulled off the fun portions of the film, very well. Raviprakash as the scheming ace photographer was good and it's a good changeover from his roles. Mathivanan, Soni, Shilpi and Rajiv completes the cast and all were very natural and reflected the current trend among friends in real-life, on-screen.
GV Prakash's music was already a huge hit and this is certainly one of his best albums ever. It's very rare these days to see an whole album becoming a chartbuster. Picturizations were neatly done as well. "Voda Voda" was fun with animations thrown in between and it was done in a quirky manner. "Kaadhal Yen Kaadhal" had the usual dance routine but the placement of the song was perfect and elevated the mood and feel of the song further. "Naan Sonnadhum Mazhai" had a neat cut-shot style with montages and so as "Pirai Thedum" though certain styles in "Naan Sonnadhum" was similar to the song "Pul Pesum" in the movie 'Pudhupettai'. Background score was on par with the quality of the songs and it was a brilliant touch by GV Prakash to use silence in necessary places to propel the impact of the scene further. Job very well done! The other strong element of the film is cinematographer Ramji. Since the film revolves around a photographer, many scenes were beautifully shot akin to a picture-postcard frames especially the shots in the forest and busy streets and lanes though he could have toned down the coloring of certain portions to be more natural. Kola Bhaskar's editing was very crisp but he could have trimmed a few scenes more in the second half. Kiran's job as an art director was simple and clear cut but a higher production cost could have ensured even better outputs especially with the awards presentation sequence. Gitanjali Selvaraghavan's costumes made the hero-heroine pair to look simple and at the same time, trendy.
Selvaraghavan chose a simple and easy plot to convey this time, yet it has all the necessary ingredients expected in his films. Dark emotions, weird relationships, subtle comedies and hard-hitting emotions. As promised, this film showcased the current situation among the youths and teenagers. Any director can come up with such simple story-lines but only talented people can make it engaging and hard-hitting and Selva is one. He conceived powerful and emotion-filled scenes and extracted nothing but the best from the artistes. The bus-stop scene, post-abortion sequence, pre-"Kadhal Yen Kadhal" scenes all had the stamp of Selvaraghavan throughout. Another brilliant touch from him is the usage of silence as a tool in making progress in scenes. There was one obvious flaw towards the end, in the film which doesn't correlate with the timeline of the plot and Selva should have corrected it to maintain continuity.
Mayakkam Enna, a real treat for Selvaraghavan fans. A simple one though, this time.
Ratings: 3.5/5 STARS
BY:TAMIL
No comments: