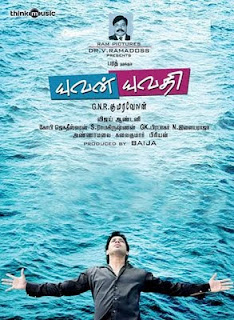 It's been a very long time since Bharath had a decent hit in his career based on a original script by a director. The last was way back in 2006, that is the critically acclaimed Veyil by Vasanthabalan. He has been dishing out meaningless films and had a decent result with Kanden Kadhalai which was a remake of Jab We Met from Hindi and the recent multi-starrer Vaanam, another remake this time from Vedam, the Telugu film. Looks like the trend of delivering bad movies continues for Bharath as Yuvan Yuvathi didn't entertain the audiences at all, apart from Santhanam's comedy portions.

Bharath, does the usual antics of a cinema hero, by dancing, fighting and romancing the heroine but other than that there's nothing commendable from him. It applies to newcomer Rima Kallingal as well. A pleasant looking dusky girl, she didn't overact in her character and was natural, thanks to the experience of doing few films in Malayalam. Sampath was apt for the role and he scored in expressions and body language though it was a little bit loud. Sathyan made a small cameo and surprised as with a gay character. He's been improving from one film to another. Krishna and Divyadarshini played their parts appropriately and there's a cute cameo scene involving Sakthi and Anuja Iyer. The only character delivering good entertainment was Santhanam and as usual he was on top form, delivering sarcastic dialogues with brilliant timing and expressions, especially in his 'dream song'.

The film delivers average on technical front too. Vasugi Bhaskar and Santhiyasri dressed up the characters appropriately. Super Subbarayan's final stunt scene was normal, Ilaiyaraja's art direction was normal and G.K Prabakaran's editing was normal too. Gopi Jegadeeswaran did a decent job in the cinematography department especially in capturing the scenic locales of Seychelles in the "Oh My Angel" song. Vijay Anthony's delivery was average too with the "24 Mani Neram" song being the pick of the lot but the "Kolaikuthu" song was too loud and unwanted. Writer Ramakrishnan might had a decent story to tell but GNR Kumaravelan's screenplay was shoddy and boring. The proceedings in the film was not properly justified and the climax was abruptly done.

Yuvan Yuvathi was boring and Bharath should stop picking poor scripts, if he wants to survive in the heavily competitive Tamizh film industry. 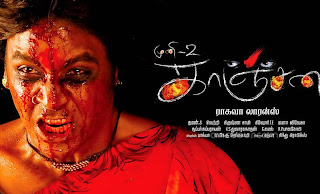 Kanchana was publicized as Muni - Part 2 but there's absolutely no resemblance to the plot of the original film other than the reprisal of scaredy-cat hero of the first film. Muni was talked for the simple twist in the knot and for the performance of Raj Kiran. Raghava Lawrence weaved a similar plot with Kanchana as well and he did a even better job than the previous film, thanks to the strong social message he sent out to the viewers.

Casting and acting was very important for a horror film, as the actors need to be convincing enough on the screen. Raghava Lawrence just repeated the same act from the first film and it was a cake walk for him in delivering all the comedy portions though it must have been very taxing physical wise to portray certain/specific nuances needed for the 'possessed' character. Lakshmi Rai has nothing to do other than to shake her legs in song sequences. Sriman was not properly utilized but his combination scenes with Devadarshini and Kovai Sarala was good. Devadarshini was apt for her role but Kovai Sarala was simply outrageous in her comedy timing. The veteran proves that she is one of the best with her superb expressions and voice modulations. The scene where her character and Devadarshini's will be conducting tests to clarify the existence of ghosts in their house was simply too funny. Kovai Sarala is sorely missed in Tamizh cinema. The surprise packet of the film was definitely Sarath Kumar as a trans-gender. No one could have imagined him in a effeminate role before this, as Sarath was always portrayed as a action star with his big and well built physic. Sarath deserves a round of applause for portraying such a role in a convincing manner.

Technical wise, the movie has nothing to talk about. Thaman's music was a big bore and only the 'Karuppu Perazhaga' song was worth watching, for it's beats and Raghava's choreography. Raghava Lawrence should be appreciated for coming out with a horror script which has a decent and needed social message of advocating the acceptance of trans-genders in the society. Their plight, sufferings, and feelings were well captured in the film and the movie highlighted the social stigma surrounding this particular group of people. Besides that, Raghava scripted the film with ample dosage of thrills, spooks and also timely comedy portions which actually keep the audience's interest and attention.

Overall, the film is an above average horror film, which spooks the audience at the right level and also with ample dosage of commercial elements, such as comedy and songs, manages to entertain viewers 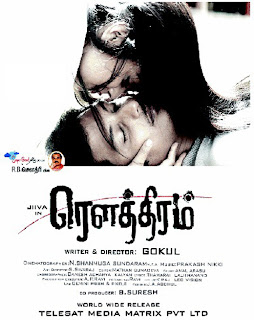 After the blockbuster success of KO, Jiiva's next Rowthiram was much expected as he has to sustain the success of KO and to also maintain a decent name as a successful and bankable actor. This movie carried a decent level of expectations, with Jiiva doing a movie under his home banner SuperGood Films besides the curiosity evoked by the teasers and trailer of the film. Also it's a much needed release for Shriya Saran as she has no other films in Tamizh cinema apart from this one. Overall, the movie did impress but only in few places as the film was very draggy and the duration of nearly 2 hours and 45 minutes is not justified entirely.

Casting wise, all the main performers in the film did a good job. Jiiva as the angry youth, underplayed all the emotions and it worked well for his character. The silent and subtle angry young man role suited him very well and brought out the desired effect the director wanted to convey through his protagonist. He was at ease in all the action sequences and proves himself as a good action movie star. Shriya Saran was chirpy and bubbly and she indeed has a good role in the film, where through her character the story moves on. Though she has to check her lip-syncing more carefully, it is a welcome relief to see her perform instead of simply showing off her curves. Prakash Raj in a cameo was brilliant and laid the foundation for the tone of the film, which it will travel on for the rest of the film. Jayaprakash, Lakshmi Ramakrishnan, Srinath, Sathyan, Mounica, Babu Anthony, Chaitanya Krishna all performed decently. Srinath and Sathyan's comediy portion brings some light moments in the film. Ganesh Acharya was a miscast and he doesn't have much to do. The director Gokul made small cameo himself and he emoted well, too.

Shanmugasundaram's cinematography is very apt and adequate and it captured the right mood of the script. His different angles and camera movements in the action sequences was splendid. His picturization of the song 'Adiye Un Kangal' number was cool and nice. Music by Prakash Nikki was a letdown with the 'Adiye Un Kangal' and the title track noticeable. Raja's background score was good in some places, but little bit loud in certain portions. Could improve a lot if he experiments more. Mathen Gunadeva's editing could have been better and he should have trimmed many unnecessary portions. S.Sivaraj's art designing was simple and natural. Deepali Noor's costume designing was natural as well, and she made Shriya to look good even without glamorous dresses. Still, the best praise should go to the stunt director Anal Arasu for he has choreographed superb action sequences. Each frame was well done and delivered the necessary 'punch' needed in those scenes. Certainly this film will stand out to be one of the best in his career. Kudos to him.

Gokul Ramana's script was a letdown. He does have some capability to churn out good sequences/scenes but the problem is, all the scenes do not connect properly and unnecessarily dragged the film for no reason. The movie has been publicized as an action film, yet it has pretty decent romance/sentiment/family scenes where, some scenes were cute while some were humorous, without going overboard. This shows that Gokul has some substance in him but he needs to sharpen his screenplay.

Final verdict, a film with superbly choreographed action blocks which could have created a big impact with the viewers if the director had concentrated more on improvising the screenplay. 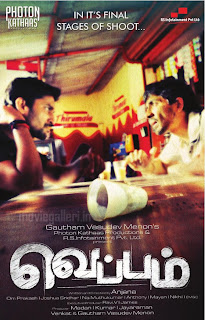 Veppam, became the first film produced by Gautham Menon's Photon Kathaas, after the company pulled out of Suseendran's Azhagarsamiyin Kudhirai project. This film which happens to have a former associate of Gautham, Anjana Ali Khan as the director, evoked good initial curiosity among the viewers with the slickly made trailer and for Joshua Sridhar's music. It has a very young cast and crew and it was expected to deliver a good product. In the end, the film did not click much with the audience, because of the lack in-depth in the script.

Nani, the Telugu actor made a decent entry to Tamizh cinema with this film in a rugged character. He maintained a good body language throughout the film and he can improve more on the expressions aspect. Karthik Kumar finally came out of the stereotypical roles of "foreign mappilai" which he is always associated with. As the mechanic, he has given his best acting so far and he did very well in the emoting section, especially with the good use of his eyes. Nithya Menen has nothing much to offer plus the dubbing voice used for her doesn't match at all with her character. The voice is too polished and suave for a character brought up in a slum. Bindhu Madhavi, scored more on acting front among the ladies as a commercial sex worker though both the ladies has limited screen presence. Muthukumar who did the role of Nani's elder brother was riveting and rugged too and the use of Gautham Vasudev Menon's voice for him was very much apt. The rest of the cast was true to their roles though not all of them has a well-etched out ones'.

The biggest asset for this film on technical front is Joshua Sridhar's music. After chartbusters in Kadhal and Kalloori, this man was missing in action and it's a very much welcomed relief to have him back. Among the songs, Mazhai Varum and Kaatrile Eeram are the standouts and are his personal best as well. Om Prakash's cinematography is another added support to this film. His picturizations resonates the mood of the scene and switches alternatively from dark, to bright to soft and warm. He captured the interiors of the small, cramped houses of the characters very well, and the Mazhai Varum song was brilliantly shot with the correct choice of colors in that song. Rajashekar's stunts, especially the climax fight was impressive. Anthony must have had a walk in the park in the editing department.

Anjana Ali Khan has set this film in North Madras, which is turning out to be the favourite of Tamizh cinema directors after Madurai in terms of geographical aspect of a film's setting. She should have perfected the script even more, as the story only picks up the heat in the second half and added also it moves back and forth for a few times, thanks to a number of incidents thrown into because of unnecessary number of characters, which doesn't really sit well with the audiences making them to feel disconnected with their interest for the film.

Veppam could have been more riveting and nail biting, if the script underwent more work though the intentions of the director was honest and sincere.